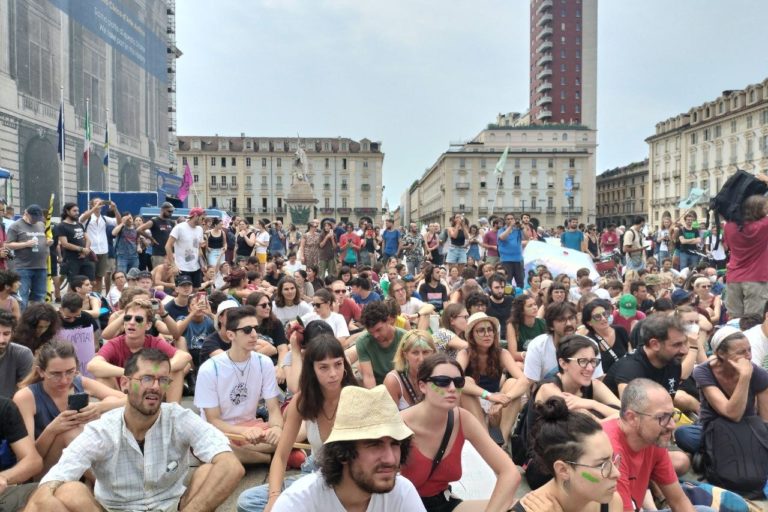 The 2022 Fridays for Future (FFF) international meeting held in Turin, Italy, ended today with a climate strike. Among the demands for urgent climate action from young indigenous leaders are calls for greater inclusion of indigenous peoples and local communities (IPLCs) in climate solutions.

Climate activist Greta Thunberg attended the meeting remotely, but said she did not take center stage during the strike to allow the voices of young people living in developing countries to be heard To hear.

The FFF’s global strike comes amid a heatwave and wildfires that swept across Europe last week.

Young indigenous leaders who lead youth movements in Indonesia and Mexico joined more than 500 climate activists in the latest strike, taking the opportunity to highlight the important role IPLCs play in protecting environment and the achievement of climate objectives.

“We cry out on behalf of our peoples for our land rights to be respected, for traditional knowledge to be respected and recognized as a solution to combat climate change and the loss of biodiversity”, said Nansedalia Ramirez Domínguez, member of the network Communication. of the Mexican Network of Peasant and Forestry Organizations.

A report released earlier this year by the Evaluation of the Declaration on Forests indicates that achieving the Paris Agreement will not be possible without recognizing and supporting the crucial role of restored and protected lands of indigenous peoples and local communities. (IPLC).

FFF is a youth-led and organized global climate protest movement that began in August 2018, when 15-year-old Greta Thunberg launched a school strike for climate action outside the Swedish parliament. The hashtag #FridaysForFuture was then created and young people from over 750 cities joined. They now organize smaller local strikes throughout the year. Among their demands is keeping the global temperature rise below 1.5 degrees Celsius, as recommended by the Paris Agreement.

In Italy, indigenous protesters highlighted the growing wave of violence against indigenous and local communities around the world as they defend their traditional territories. They cited cases of criminalization, human rights abuses and land grabbing, as national governments prioritize development and conservation projects that force people off their ancestral lands.

On July 14, the Association for Tropical Biology and Conservation, a scientific society with more than 900 members in 67 countries, demanded urgent action to end attacks on indigenous peoples, conservationists and communities in the Amazon region in a July 14 statement.

According to Global Witness, a London-based NGO, Indigenous peoples represent a third of the total number of environmental defenders killed in the world, despite making up a total of 4% of the world’s population. The most critical situation is in Colombia, where 117 Indigenous people were reportedly murdered between 2012 and 2020.

“Climate justice is not just about the climate itself, but also about human rights and justice for indigenous peoples who are being murdered, threatened, imprisoned and discriminated against while protecting the only rainforests we have in the world,” said Michelin Sallata, communications officer for the World Alliance of Local Governments and a member of the Toraya tribe in Indonesia. She tells Mongabay that community land tenure and land rights are one of the often overlooked ways to mitigate climate change.

According to the Climate Focus and World Resources Institute (WRI) report, approximately 90% of IPLC lands in Brazil, Colombia, Mexico and Peru are carbon sinks. The carbon sequestered in these territories is equivalent to around 30% of the climate objectives of the four countries of the Paris Agreement for 2030.

While the IPLCS manage more than 950 million hectares (2.3 billion acres) of the world’s rainforests, communities have no legal rights to more than half of the area. Sallata says this leaves forests vulnerable to the destruction that typically occurs at the hands of extractive companies from the global north, such as Europe.

For this reason, she said, the FFF meeting and strike in Italy was an opportunity to highlight the role that companies in industrialized countries play in contributing to deforestation, as well as human rights violations. human rights.

“We believe that while we are in Europe, we should march and voice this issue to target companies that are headquartered here,” Dominiquez told Mongabay.

Darragh Conway, senior legal counsel at Climate Focus, told Mongabay in a brief interview that there is no reason for governments or policy makers not to include IPLCs in climate solutions. He said there was enough information for them to be the most effective guardians of the forest or nature in general.

“Obviously they have to sit down at the table,” he said.

While the Glasgow Declaration on Forests and Land Use from last year’s UN climate conference, which pledges to end deforestation by 2030, directly cited IPLCs as having a key role in forest management, indigenous and local communities fear that the emerging support to pass.

While leading the climate strike to a close, the two young leaders told Mongabay that it was crucial to support young indigenous and local communities around the world who are marrying their ancestral knowledge with science and technology to deliver solutions to the climate crisis.

Feedback: Use this form to send a message to the author of this message. If you want to post a public comment, you can do so at the bottom of the page.