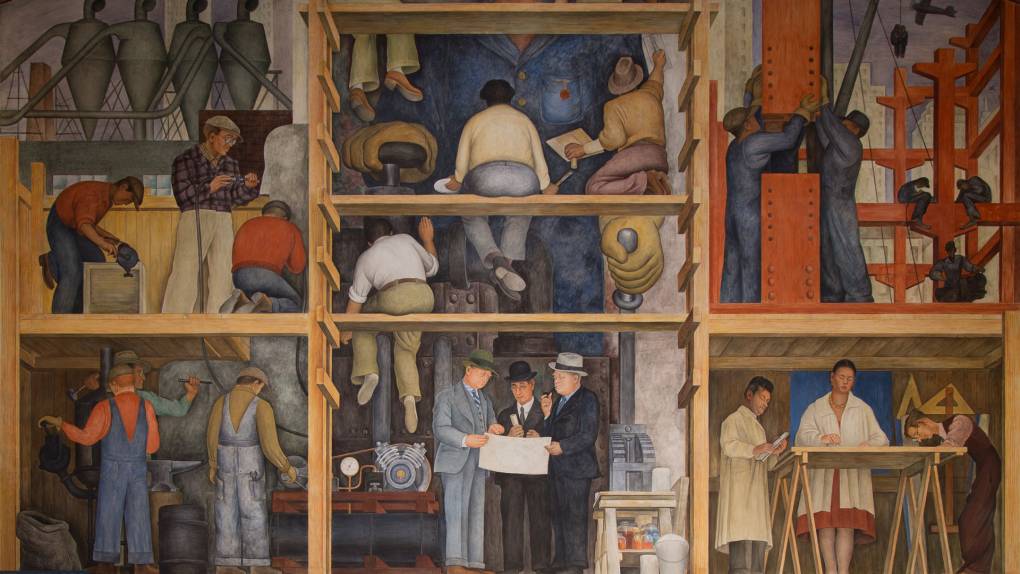 SF’s board of directors voted on Tuesday to start a process to designate Diego Rivera’s famous mural on the San Francisco Art Institute’s Chestnut Street campus as a city landmark, to prevent its sale and removal. But the school, strapped for financial means, begs the council not to go down that road for now, because even if it doesn’t sell the mural, it must use the asset to get a loan.

As one of three murals Rivera painted in San Francisco between 1931 and 1940, the 1931 mural titled The realization of a fresco showing the construction of a city is a unique, self-referential fresco that shows Rivera celebrating the industrial worker and contemplating all the forces that go into creating a work of art. And, as KQED notes, it presents “the artist [own] wide back “in the center, sitting on scaffolding while painting, with” anonymous steel riveters, industrial workers, then SFAI President William Gerstle and Coit Tower architect Arthur Brown, Jr . “

As SFist reported last week via The New York Times, there is a rumor that George Lucas’s Museum of Narrative Art is interested in the mural, which is said to be worth $ 50 million, and it is money that the SFAI has sorely needed as she tries to escape crushing debt. * But to talk about selling and moving the mural is “heresy,” says supervisor Aaron Peskin. And he, along with Supervisors Myrna Melgar and Hillary Ronen, co-sponsored a resolution on Tuesday to initiate the historic designation process.

Noting that the work is in line with the Mission Mural movement in San Francisco and that it “has inspired generations of artists, including alumni of the San Francisco Art Institute and countless members of the public”, the resolution is set in motion. a process by the Planning Department and the Historic Preservation Commission that would keep it in San Francisco in perpetuity.

SFAI board chairwoman Pam Rorke Levy wrote to the supervisory board on Monday urging them to wait “at least a month” before making a historic designation. “Marking the mural now will prevent us from using it – SFAI’s only major asset – to secure the $ 7 million bridge loan we need to weather the pandemic and rebuild our workforce over the next two years. years, ”Levy said.

Last March, the SFAI suspended registration and appeared on the verge of utter ruin – the pandemic having struck him while he was already down. In July, the school seemed to be on some path to recovery – the entire Chestnut Street campus was pledged as collateral for a $ 19.7 million loan from a private bank several years ago, and the University of California bought that debt to help save the school although now the SFAI is indebted to the UC Regents, like the The New York Times reported Last week.

SFAI alumni and professors would be appalled by the board’s use of the mural as “mere commodity”, with an email from the adjunct professor saying the notion “undermines SFAI’s own pedagogy. his school”.

It remains to be seen whether the oversight board moves forward with the landmark designation, or how this latest drama will play out – in his letter, Levy suggested that the city might want to lend to the school’s money in return for “a financial interest in the mural,” and Peskin scoffed and said the town was not the school’s bank.

* This message has been corrected to indicate that there was a rumor of interest in the museum piece, but no actual offer.