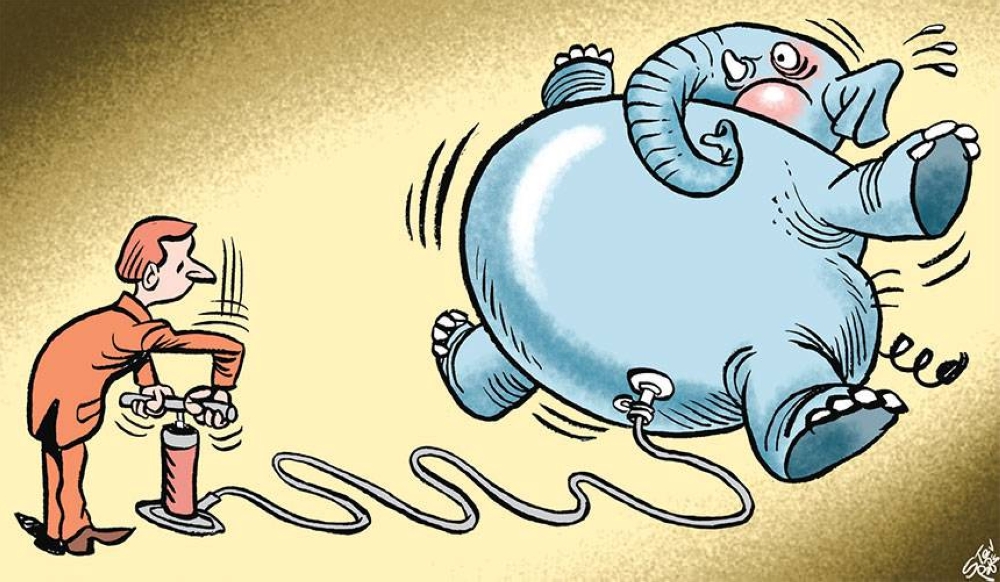 I HOPE to be more educated on the question of food, because it is essential. Although I know which side I have fallen on, I am not qualified to advise on specific policies and measures to be taken to achieve what I believe to be the most important objective of food security in relation to the decline food prices through imports. My thinking about the issue of food prices versus security has developed in much the same way as my perspective on our current dilemma of inflation.

My default view on inflation is that it’s unsustainable to print too much money and have high deficits. Yet, as classic Keynesian economics points out, it is necessary to avoid the even worse scourge of severe recessions, depression and deflation. This expansionary policy must be countered in times of economic prosperity by accumulating budget surpluses, paying down debt and improving capital assets. Alas, the former is usually done especially by the right wing in America when it’s in power, then back to being deficit hawks when they’re not. If they are in power in good times, rather than rebuilding surpluses and dealing with needed capital improvements, they usually fail to cut taxes for the wealthy. Look at the budget-busting tax giveaways without offsetting the spending cuts used by second President Bush and Trump that squandered the best fiscal state that Clinton and Obama left them and then had to be addressed by Obama and now Biden . The temporary stimulus triggered was an economic sugar spike.

This time around, on what to do coming out of Covid, there was the continued expansionary mode championed by, among others, Paul Krugman and the Biden administration platform. The Cassandra preaching caution and warning that this was inflationary and would cause a recession was Larry Summers and politically, Senator Joe Manchin. I have the greatest respect for Krugman and Summers. Krugman was found to be the most accurate in his economic forecasts. Krugman believed that inflation was the result of bottlenecks and would be like in post-war Germany, that inflation would come down as supply chain and transition issues resulting from Covid would resolve. Summers felt that the labor market was too tight and he never saw a period in the United States where inflation was above 4% and unemployment below 4% without a recession following in both. year.

My instincts were towards Summers, but I thought all this quantitative easing going on since 2008 would have already led to inflation and I understood Krugman’s point. We all know what has happened since the end of last year. At 8%, inflation in the United States is at its highest in 40 years. Summers was right. What was the difference? Rather than stick to his thesis, Nobel Prize-winning economist Krugman graciously conceded that Summers was right and analyzed in several of his columns where he was wrong, what this inflationary scenario means and where he still disagree on the magnitude and duration of this inflation cycle. and what to do. More importantly, he looked at the facts and conceded the point and moved on to how to handle it rather than whether inflation is a problem. It’s like arguing over who’s going to win, the Celtics or the Warriors. You can make all of your arguments for either team, but when the game is over there is an analysis of why one team won and the other lost, not who won. On inflation, hawks like Summers were right.

Get the latest news

delivered to your inbox

This is the same approach that seems to be happening with at least my view of food prices in relation to food security. Given our population of over 112 million, my instinct was for food security, and it was foolish to think that opening up markets and relying on imports would be acceptable and that would ideally lead to food prices lowest for consumers. Yet many people I respect were clearly on the side of food prices and believed that increasing production to be self-sufficient at least in staples like rice was not feasible and had rarely been for decades. .

In fairness to the food prices versus the security crowd, most I’ve spoken to aren’t dogmatic and thoughtless about it. Unlike the sometimes psittacist “leave it to the private sector” tribe and the outdated Washington Consensus tribe who see these mantras as dogma rather than policy to be tested and affirmed, revised or rejected, proponents of falling food prices believe that food security is desirable, simply unattainable. given the realities and limitations in the Philippines.

I have two issues accepting that commodity imports are here permanently and being open to more imports to manage food prices. First, foregoing sufficiency of food production and security will not stop at the status quo, but will cause import levels to rise as local production declines and farmers lose even more prices.

This can lead to something like what happened with OFWs. They started as a limited and supposedly temporary measure when there were not enough jobs in the country. Well, the population kept growing and the jobs never came. Today, about 50 years after the start of this temporary expedient, more than 10% of our population – therefore more than 20% of the workforce – must work abroad if they want to have a paid job. and prevent their ever-abundant families from starving. Could it be the same with national food production? Second, while commodity import prices may be cheaper in times of surplus, what happens now, when there are shortages and bottlenecks? It may not be limited to high prices, there may even be no availability. So what? Starve?

The evident supply shortages and selective export embargoes that currently prevail on exports of wheat, rice, chicken and fertilizers from various countries tell me that it is dangerous and foolish to rely on open markets and imports as a data. Again, what if there are no imports available in the quantities needed? Or are they only available at very high prices? Asia’s two rice exporters, Thailand and Vietnam, are coming together amid tight supply to ensure they don’t undercut each other and get good prices for their farmers and producers.

This brings me to Robert Kennedy’s closing line in his 1968 campaign where he quoted George Bernard Shaw: “Some people see things as they are and say, why? I dream of things that never were and I say, why not?