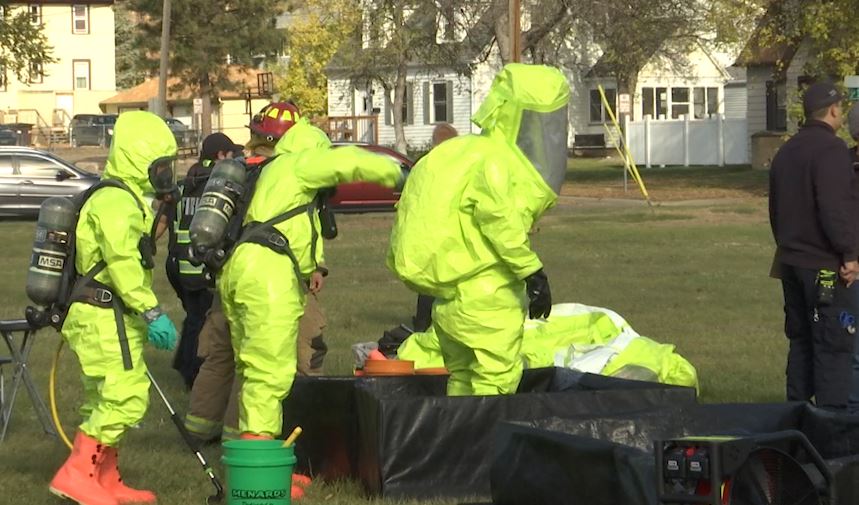 Seven in 10 firefighters died from work-related cancer in 2016, according to the Firefighter Cancer Support Network.

Firefighters across the country are asking for more help to save their lives.

Firefighters have a higher risk of developing and dying from cancer. Carcinogenic toxins in fire rescues have long-term effects on their lungs, kidneys, large intestines, and almost every other part of their body.

The general president of the International Association of Fire Fighters, Edward Kelly, said chemicals are everywhere, including their gear.

“One of the most prevalent chemicals in a lot of what we see are these PFAS chemicals, these forever chemicals.”

“There are a few that come to mind because I work with a couple. One of them perished and is on the wall I mentioned in Colorado Springs.

As an active firefighter himself, he said it was traumatic to watch his peers take this path.

“It’s happening in our state from corner to corner. From Williston to Fargo and from Grand Forks to Dickinson. We do everything we can to protect ourselves. We need more help. This is another part of my post. We need more help politically.

This help has taken different forms over the years, except that some firefighters say it is not enough.
In Minot, as in many other parts of North Dakota, training captain Devin Walter says they take showers and change gears as often as possible.

“So we’ll actually have two sets of gear for each firefighter so they don’t put dirty gear on after calls. We also have particle hoods that will filter down to the smallest particles. In fact, we are also integrating a steam shower into our brand new station.

“Our cancer is proven to be work-related. We understand when we sacrifice ourselves for the public. So one of the pleas we make is that when we get sick our families don’t pay the penalty. One of the things I know is that North Dakota has some protections against presumption of cancer, but it lags far behind many other states in the United States. “

He also said everyone has a role to play in keeping firefighters safe.

“Everything in your home is what we firefighters have to deal with when it burns down. So the less chemicals that we infuse in our daily life, the more we will be safe from cancer. “

Earlier this year, lawmakers in North Dakota passed a bill to provide greater insurance coverage for rescuers who died in the line of duty. The new Century Code also provided retroactive protections for all stakeholders.

The IAFF is now in partnership with the American Cancer Society to advance and share occupational cancer research. This, they hope, will help in the early detection, treatment and prevention of cancer in firefighters and emergency medical personnel.